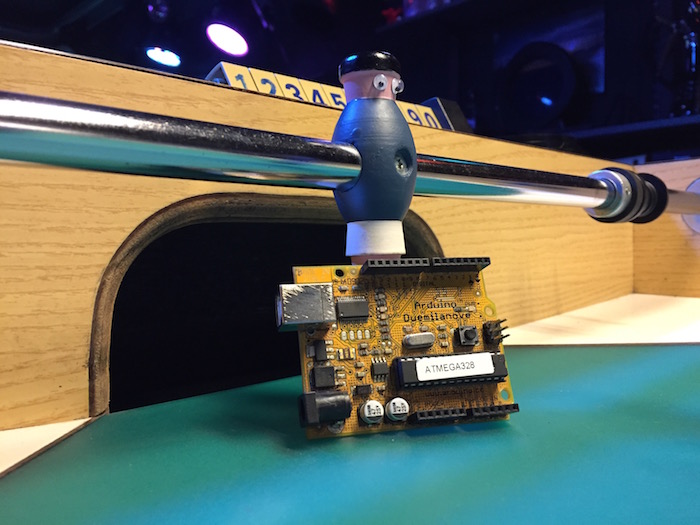 A complete guide on how to use an Arduino to automate your Foosball Table, including an automatic score counter on any mobile Phone, Tablet, PC or Laptop. Using an Arduino network shield we create a server that will be viewable on the Arduino’s IP. the score-counting will be handled by two lasers and light dependent resistors which will detect balls from crossing the goal line.

I found a ON/OFF switch with a “Start” function, this switch has 3 positions, ON,OFF and START, with Start being spring loaded. This will be connected to the RESET of the Arduino to reset the score.

The Blue&White wire’s are the Reset&GND of the Arduino (Arduino will reset if reset pin is connected to GND). The other wires are the power to the PC’s Powersupply.

I used a PC Power Supply I got out of an old PC, a Detailed guide on how to prepare your PSU can be found HERE

For this part you will need 2 Light Dependent Resistors and 2 Laser Modules, the LDR’s will “read” the laser pointer, this will make the value of the resistor drop to a constant (low) value, when the ball passes the laser, the laser will be blocked causing the LDR’s value to rise, whenever the Arduino detects such a change it will know a ball has passed… (a phototransistor would be a better solution here)

So first install the laser modules in your table, drill 2 holes on the same side of the table, make sure the beam will hit the ball on the center(largest part), Insert the laser but don’t glue it in place yet:

Now connect your lasers to your Power Supply (Orange wires 3.3V!). These lasers will be on whenever your table is powered.
(make sure the lasers NEVER short as they will break instantly)

The LDR’s will detect whenever a team scores since there will be one LDR in each goal we can detect who scored. First, solder some wires onto your LDR and make sure they cannot touch each other:

Then drill a hole on the opposite side of the laser, pull the LDR trough and fix it in place with some hot glue:

When both LDR’s are installed, aim the lasers on the LDR’s and use hot glue to fix it in place. Both lasers should now permanently shine directly on the LDR’s:

All LDR’s need an extra resistor, the detailed guide on how to wire your LDR’s can be found HERE, connect the analog in of your LDR’s to your Arduino on Analog pin 0(A0) and 1(A1) but don’t forget to plug in your Network shield first

Now you are done wiring your table, it’s time to program the Arduino, this program should work and start a server on but the IP can be changed manually in the code:

The Arduino may need to be reset before making network connection.

Depending on the IP you chose when programming your Arduino, you should surf to http://192.168.1.117 to view your score. To reset your score, Reset your Arduino.

Your score should now be visible on your device updating every few seconds. Multiple devices will work just fine.

2 Kick-Off – Teams toss a coin for first kick-off (or table side) at the start of the game. Subsequent kick-offs are to the team conceding the most recent goal. Play starts with the ball stationary on the midfield (5-bar). Ask if your opponent is ready to play, and the ball must touch two 5-bar players before it can be played forward in a pass or shot.

3 Dead Ball – A ball on the table is declared ‘dead’ if it cannot be reached by any player figure. If the ball is dead between opposing 5-rods, play is re-started with a new midfield kick-off to the team which conceded the last goal. If the ball goes dead behind the midfield rods, it is re-started in the nearest defensive area. Ensure your opponent is ready to re-start play. The ball must touch two players before being passed or shot.

4 Ball off table – The ball is ‘out’ if it leaves the playing area, defined as the area inside the cabinet or directly above it, including the edges of the table. If the ball hits scoring markers, ashtrays etc and rebounds into play it is dead. Play is re-started in defence by the team which did not initiate the most recent shot (i.e. if the ball is shot by the attacking team and is deflected out of the table by the defending team, it goes to the defence of the defending team). Ensure your opponent is ready to re-start play. The ball must touch two players before being passed or shot.

5 Bounce-outs – a ball which enters the goal and bounces out counts as a goal. Play is re-started with a new midfield kick-off to the team which conceded that goal.

6 Passing – a stopped or pinned ball (‘pinned’ means trapped against the playing surface or side-wall, or where the ball touches the front or back of the player figure before the motion of the pass) cannot be passed directly from the midfield to the forward rod, nor directly from defence to midfield, the ball must touch another player figure and be in motion when a pass is attempted. The ball may only touch the side-wall twice when in midfield.

7 Time Limits – The ball must leave the rod of possession within 10 seconds on the midfield, or within 15 seconds on the forward rod or defence (goal and defence rods count as one rod). Time limits start when the ball comes in range of any player figure on the rod.

8 Time Outs – Teams are allowed 2 time outs per game of up to 30 seconds each. A time out can only be called by the team in possession of the ball and when the ball is stopped or pinned. Either team may call a time out when the ball is not in play (e.g. between balls or when the ball is dead or off the table).

9. Change of Position – either team may change positions (between attack & defence) only between balls, during a time out or before/after a penalty shot. The team with possession must change first.

10 Fouls – no distracting an opponent, spinning (see above), jarring (moving the table such that the roll of the ball is affected), reaching into the playing area without opponents permission (e.g. for dead ball) , unsportsmanlike conduct etc. Penalty is possession to the other team, who have option to continue play (e.g. if foul results in an own-goal from the offending team). In the event of a jar possession is given to the rod which would otherwise have caught the ball.

11 Have Fun!! – Please note that these simplified rules are designed to improve your enjoyment of the game, official ITSF tournament rules are more complex, and can be found at:

Whenever someone gets a 5 vs 0 score the losing player(s) have to crawl under the table. However, these 5 goals have to be made without letting in a goal from the other side so whenever the other player scores… He gets 1 and you get reset to 0 and the game starts over again 🙂 hours of fun guaranteed.

Based on my personal twist, whenever you get reset to 0 you have to take a sip from your drink for every point you have been set-back 🙂 Good Luck!

Ideally you want your score projected on a 150″ Screen 🙂