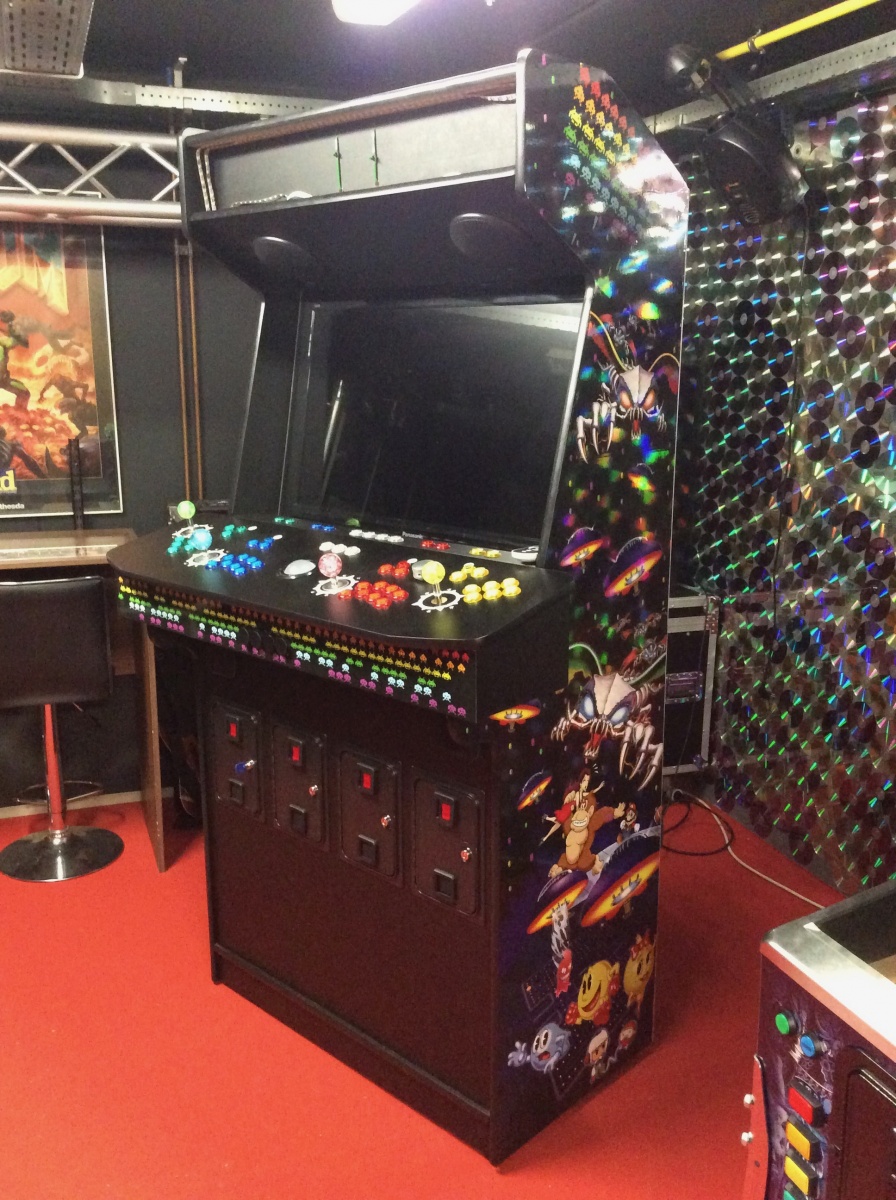 This is the introduction to building your own full-size, 4-player Arcade Machine. In here you will find everything you need to start building your own. In this part, we will decide over the design of the cabinet, what special effects, controls, TV, artwork and much more. This is a very large project and I recommend to thoroughly plan your build ahead so you don’t run into troubles during the actual build.

This guide contains everything I installed in my personal arcade but to keep the final build cheaper, you can leave out some parts which you don’t need. I also advise looking for second-hand parts to lower the cost. The total cost of the cabinet can be anywhere from 2500$ to 10000$ depending on your choices, I don’t have the exact cost of mine but I had quite some materials laying around and I would estimate the complete build somewhere around 5000-6000€. I also recommend ordering most if not all the materials up front. I ordered a lot from China to keep the cost low but these orders can take over a month to be delivered (Belgium).

This arcade cabinet is still a work in progress, the guides are not done yet, updates coming soon.

I decided to design the whole cabinet from scratch but since this takes some time, there are a few other options to get you kick-started

If you decided to build your own unique cabinet, you should start thinking about your side panels. Personally, I wanted a high but slim cabinet. The screen will be an old flatscreen LCD that’s driven by a computer so plenty of space for that. I found a compilation of many real arcade cabinets (more Here)

I also recommend taking a look at some other personal builds (Here, Here, Here, Here) to get a general idea what you want. After doing some research I started drawing a dozen side panels. Then I picked the best-looking, took a piece of the paper table cloth and scaled the drawing onto there. Then I traced the lines of my original drawing onto the large paper and made small adjustments where needed. Eventually, I measured all the sizes and made it into a carton example. This carton was later made in CAD to send to the CNC at my local woodshop.

I left the rear covers out for now, the cabinet was becomming verry heavy so I went with thick cardboard to cover up the back.

Initially, I was going to design my own control panel but due to time constraints, I decided to start with one of the control panel kits that on HERE. I went with a 4-player control panel, you can also choose the 2-player control panel as this will drastically lower the overall cost of your arcade and saves a lot of time while wiring all controls. Also, most of the original arcade cabinets were made for 2 players, only in the late ’90s, the 4-player models started showing up. From my personal experience, if you don’t really need 4 players, definitely go with the 2-player alternative.

Another important measurement is the actual height of your controls, this should be taken into account while designing your side panels as well. The optimal height for your length can be measured by standing upright, then bend your arms forward with your elbows at 90*. Now measure the height from your hand to the floor. this should be your personal preferred height. For me, this height is 113cm from the floor. This may seem high at first but I find it a very natural playing positions.

There are a lot of extra controller options like trackballs, spinners, lightguns… Ultimark provides most of these toys. I recommend choosing all toys from Ultimark, they are a bit more expensive then simular chinese toys but it’s the quality is definatelly worth the extra dollars.

To control the computer’s mouse, I added the Ultimarc trackball in the center of my control panel. I bought the Translucent ball with the RGB LEDs on the bottom. The trackball comes with a ‘mouse’ controller board which connects to your computer with USB. The trackball doesn’t require any drivers and works out of the box. There are also a few games that can be played using a trackball, usually arcade cabinets.

The spinner is also one of those special controls usually found in arcade cabinets from the ’90s. A few popular games like Arkanoid, Tempest, Tron… were initially made to make use of a spinner. Later these controls were mapped to the D-pad in home consoles. Ultimark has one of those authentic spinners that connects to your PC over USB. The spinner is recognized as a mouse in windows and doesn’t need any drivers. Optionally you can also replace the spinner top with a car’s steering wheel to control racing games as was done in many Namco racing cabinets.

I also added a lightgun to the cabinet, the most popular game that introduced a lightgun is Duck hunt with the Zapper on the Nintendo Entertainment system. It was an awesome way to control games although not many shooter games were actually made, there are a few arcade cabinets that had guns, the ps2 and ps3 had the guncon guns but other than Time Crysis, not many shooter games were actually available on the playstation. Another issue was that these regular lightguns won’t work on the new LCD flatscreens. The Ultimark Aimtrak uses a WII style tracking mechanism that’s verry accurate and has verry little to no lag when aiming. The Aimtrak has an optional kickback board which will replicate the gun’s kickback when firing onto the screen. The controller has a Trigger and Two mappable buttons in the front (left & right). Most lightgun arcade cabinets were built for 2 players so 1 or 2 guns are perfectly mappable in the emulator. I don’t recommend using attaching more than 2 guns as there are no real games with 3+ player support.

If you are into arcade flight simulators, you can install a flight stick on your control panel. Ultimark has the UltraStick which can be configured with a flight handle top. These will also just connect to your arcade using a USB cable and won’t require any drivers. The buttons are remappable using the configuration software. Personally, I did not install a flight stick onto my control panel because it would ruin the looks and would just stick out too high blocking the view on the screen. I’m not sure if there were many flight games made other then a few arcade cabinets.

If you like pinball games, you can add flipper buttons on the sides of your control panel and even a digital plunger to control your ingame plunger. Virtuapin has a complete set available including a real plunger and tilt/knock detection. The most popular games are Pinball FX 3 and The pinball arcade. Pinball FX3 has many digital tables with lots of animations going on, the pinball arcade is specialized in recreating real original pinball tables that have existed in the ’90s. The most popular are tables are Twilight zone, Star trek, attack from mars, funhouse… Both games combined have over 200 tables good for hours of pinball fun.  I already have a dedicated pinball cabinet so I did not install this kit in my arcade cabinet.

I will be using an old 60Hz 1080p LCD TV I had laying around. The screen is 37″ and screen dimensions are 83cmx47cm. I made my cabinet a bit bigger in case I want to switch it later with a newer model with even thinner bezels The width of my cabinet is 93cm which should be enough for a 40 inch TV. There is no real advantage in a 4k monitor as most of the games are pre 90’s. where you can almost count every pixel yourself.

The computer for this arcade cabinet doesn’t have to very powerful. most of the games are pre 20’s and can literally run on your TI-84 calculator. If you plan on emulating systems like Wii, PS2 I recommend getting a dedicated graphics card as well and If you plan on emulating PS3 games… you will require a very powerful machine altogether (GPU & CPU & Ram). I would definitely use an SSD for your operating system for smoother loading of all the videos/artwork in the front-end software. I recently bought a new (gaming) computer but the old one was stilll very usable today (2011 I7). I used all the components so no extra expense for a computer. if you don’t have one laying around. this is all the hardware from my old system which does a great job emulating PS3 games. A computer with somewhat the same specs as mine should be more than enough:

I plan on using the cabinet as a jukebox, so I combined two sound systems. First I will use the Logitech Z2300 2.1 set for the lower compartment with two speakers in the front door and the subwoofer firing from the back of the cabinet. Then for the top speakers, I ordered the following car audio set

For cabinet lighting, I went with RGB led strips on the back of the cabinet. These are normal 12V RGB led strips, attached to the backside of the side panels using an aluminum profile. I also ordered a remote-controlled LED-strip controller and a power supply to go with it.

I will use LED lit arcade buttons which can be controlled over USB, also we need another controller to make the computer register any button presses. Herefore I used two chips that are designed just for these tasks.

For registering controls to your computer I will be using the IPAC-4 and an IPAC-2. Both IPAC devices will convert any physical button presses into a button press on your keyboard. This way each emulator can be configured to work with normal keyboard controls. I had to use two controllers in conjunction with each other to have enough inputs for all my controls.

I will be using Windows 10 and Hyperspin as my front-end as its around for a while now and there is a lot of “bolt-on” packs available. These packs reduce the work needed to get your games working. There are a few alternatives available but personally, I like the customizability of hyperspin as well as the UI:

For most of the game systems, I will be using the MAME emulator. This is mainly a collection of emulators for many different old game consoles or computers. Although MAME can emulate a lot of game consoles, we will still need many different emulators to get all systems running. This will be covered in the last part of the guides.

To finish the look of your cabinet we need large stickers with the artwork. If you know your way around in photoshop, you can design your own. alternatively, ArcadeArtwork has the largest collection of pre-designed artwork I could find. ArcadeArtwork helped me resize my chosen artwork to match my side panels.

Applying the artwork is one of the last steps of the build but covered in detail in the last part of my guides.